Cthulhu—Great Old One, The Sleeper of R’lyeh, The Great Dreamer—all names which can inspire dread in the most seasoned adventurer and/or role-playing gamer. His awakening is preceded by madness, and followed by the destruction of life as we know it—and he’s now available to you as a PATRON!!!

Cthulhu as a subject for exploration in gaming dates back to the earliest days of role-playing games. The Great Old One had made sporadic appearances in various Dungeons & Dragons publications—for example, Greyhawk–Supplement I (Gygax & Kuntz) mentions Cthulhu as an entity that could be summoned via the gate spell; and the D&D Basic Set (Holmes) mentions Cthulhu as a deity that characters might swear upon. But there were no real “in-game” rules until “The Lovecraftian Mythos in Dungeons & Dragons”, by Rob Kuntz and Eric Holmes, in issue #12 of The Dragon. This content, in turn, was revised by James Ward to appear as an entire chapter in AD&D’s rare first two printings of Deities & Demigods. While Cthulhu was written out of later printings of this tome, we have a few of these prized print-runs, and can attest to the mind-curdling insanity they breed. Along with art from Erol Otus, they are some of the best aspects of the book!

Of course, we would be remiss if we did not mention perhaps the most notorious of Cthulhu’s manifestations, for what gamer has not had a character driven insane by the many iterations of Chaosium’s Call of Cthulhu RPG? Cthulhu eventually made it back into D&D mythology with the d20 version of the Sandy Peterson classic horror game—and it has been there ever since! Most notably for our purposes, as a god of neutrality in DCC.

Cthulhu as a patron for Dungeon Crawl Classics was the germ of the idea that eventually led to the creation of Tales from the Smoking Wyrm. While playing a session of DCC at Gary Con X, Brian wondered why his cleric could draw power from Cthulhu as a god, but that there was no vehicle to do the same for a wizard—after all, the crazed cultists described in Lovecraft’s (and other Mythos writers’) works seem well-suited to be portrayed by a wizard’s search for power in long-forgotten or unmentionable eldritch tomes. The corruption mechanics built in to DCC were ripe for a patron like Cthulhu, and after scouring numerous other DCC zines to ensure no duplication of effort, our version was given life—LIFE, I TELL YOU!!!

This particular article will include everything your wizard needs to draw power from the Dreamer in the Deep, including full invoke patron results, patron taint, spellburn, two Cthulhu-specific spells, as well as one ritual—more on rituals in a future update! 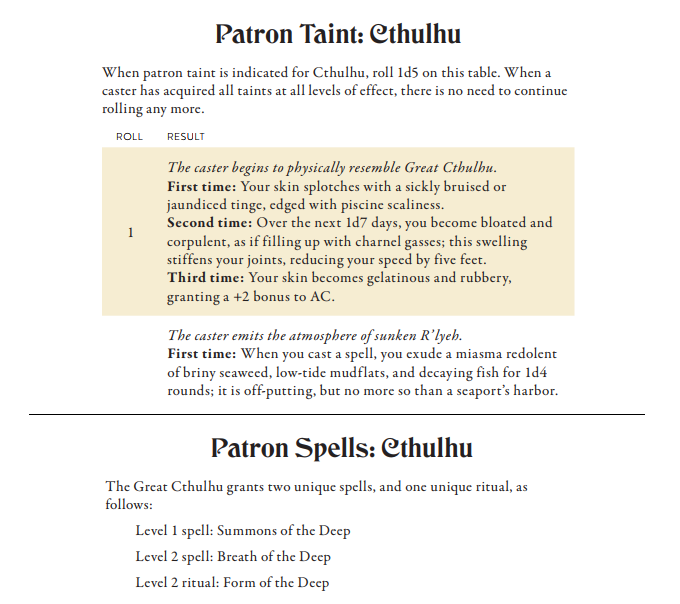 The full rules for using Cthulhu as a DCC patron can be found in issue #1 of Tales from the Smoking Wyrm, available now from Goodman Games and DriveThruRpg !